On September 19th Donald Trump Declared himself to be Our Dictator 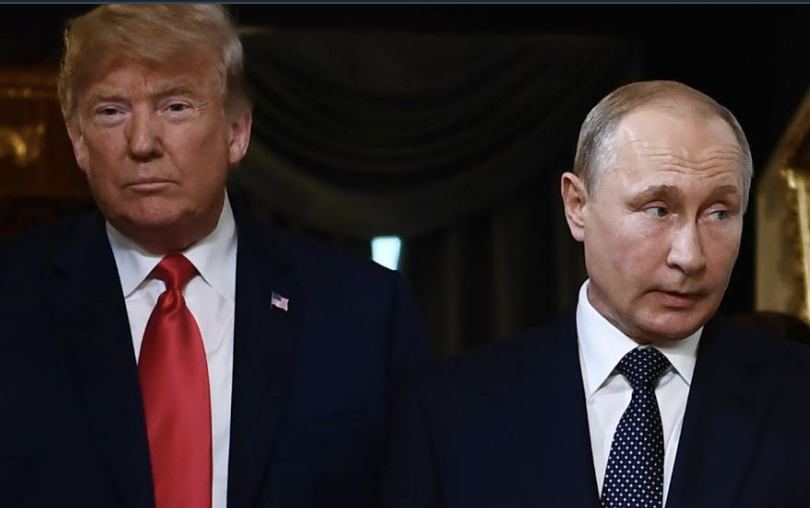 On the morning of September 19, 2019, history will note, President Donald J. Trump officially declared himself to be this country’s first authoritarian dictator. On that day he announced to the world, in a court filing, that he was assuming unlimited criminal immunity to act within or outside the law. He also declared that anyone who works for him on his behalf is also above the law and cannot be investigated, charged or convicted of any crimes as long as he is in office. By logical extension, if no violation of the law can apply to him while in office, then no election can remove him from office and no Congress can remove him by impeachment or check his powers in any way.

This isn’t how the first draft of history read that day. Trump’s dramatic claims received relatively little notice. They came in a court filing and were so outrageous and incredible that no one took it seriously. The headlines on that Thursday read like some variation of this one from the New York Law Journal:

In the wake of the Mueller investigation, with its assortment of indictments, trials, and convictions of Trump associates, there were over a dozen less noticed criminal investigations spun off to be conducted in other states by other prosecutors. It was a court filing in one of these lesser-known investigations that the President announced his sweeping declarations.

On October 7, 2019, District Judge Victor Marrero, of the Southern District of New York, summed up the President’s claim in an introduction to his ruling rejecting Trump’s claim. Judge Marrero’s ruling reads in part:

“The President asserts an extraordinary claim in the dispute now before this Court. He contends that… under the United States Constitution, the person who serves as President, while in office, enjoys absolute immunity from criminal process of any kind. Consider the reach of the President’s argument. [As] the Court reads it, presidential immunity would stretch to cover every phase of criminal proceedings, including investigations, grand jury proceedings and subpoenas, indictment, prosecution, arrest, trial conviction, and incarceration. That constitutional protection presumably would encompass any conduct, at any time, in any forum whether federal or state, and whether the President acted alone or in concert with other individuals. Hence, according to this categorical doctrine as presented in this proceeding, the constitutional dimensions of the presidential shield from judicial process are virtually limitless: Until the President leaves office… [this includes crimes committed in*] his official capacity, but also to ones arising from his private affairs, financial transactions, and all other conduct undertaken by him as an ordinary citizen both during and before his tenure in office.”
“Moreover, on this theory the President’s special dispensation from the criminal law’s purview and judicial inquiry would embrace not only the behavior and activities of the President himself, but also extend derivatively so as to potentially immunize the misconduct of any other person, business affiliate associate, or relative who may have collaborated with the President in committing purportedly unlawful acts, and whose offenses ordinarily would warrant criminal investigation and prosecution of all involved.”

The judge concluded his introduction with these words:

“Because this finds aspects of such a [Presidential] doctrine repugnant to the nation’ s governmental structure and constitutional values, and for the reasons further stated below it ABSTAINS from adjudicating this dispute and DISMISSES the President’ s suit.”

In summary, Cyrus R. Vance, Jr. is a District Attorney in New York. He empaneled a grand jury to probe whether the Trump Organization falsified business records related to money paid to Stormy Daniels and Karen McDougal prior to the 2016 Presidential Election to keep them quiet about his sexual relationships with them. These were payoffs funneled through Donald Trump’s personal lawyer, Michael Cohen. Some of these payments were by checks made out to Cohen from the Trump Organization, a non-profit entity registered in New York. These payments were categorized as legal fees on the books of this non-profit.

Paying to keep damaging information from the public during an election is a violation of campaign finance laws. Using money donated to a non-profit organization for personal use is also a violation of the law, as is falsifying business records to cover up such misdeeds.

The grand jury investigating the business records of the Trump Organization requires documents, tax records and the cooperation of Mazars USA, the accounting firm hired by the Organization. Trump sent a letter to Mazars USA and forbade the company from releasing his tax records. The jury subpoenaed the company to release the last eight years of Donald Trump’s tax returns. That’s when Trump made his move on unlimited Executive power.

How this constitutional crisis resolves is critical to our republic. By elevating William Barr to Attorney General, Trump, and the Republicans have removed any chance that the Barr-lead Justice Department will ever challenge any illegality committed by the President or his administration. By ramming through two ultra-partisan Supreme Court Justices, and by seating so many highly partisan judges to the federal bench, Trump and the Republicans are betting that all legal challenges to both Congressional oversights, or judicial challenges to Trump’s limitless criminal immunity doctrine, will ultimately fail. The complicity of Congressional Republicans in installing this all-powerful authoritarian government should now be obvious. Articles of impeachment should still be aggressively pursued, but it is no longer a given that an impeachment conviction in the Senate would remove Trump from office. Under his unlimited criminal immunity doctrine, it isn’t even certain that he will honor Presidential election results, or even allow future elections.

Here is where I believe we stand. If the courts don’t uphold the rule of law, all hope for the republic is lost. If the courts do uphold the rule of law after House impeachment and Senate conviction, then it will be up to some combination of the President’s willing capitulation, law enforcement, the U.S. military or massive national citizen protests to assure that Donald Trump leaves office. If the Senate won’t convict Trump of impeachable offenses, it is up to the voters to set the stage for the same options mentioned above. If Donald Trump is reelected, however, it will probably be too late to save our Republic from dictatorial rule.

The New York Times recently asked each of the Democratic primary candidates for President a series of identical questions. The last question on their list was, “Does anyone deserve to have a billion dollars?”

The trivial framing of that question bypassed the grave urgency for asking it in the first place. In a variant form of the question, the Times was essentially asking, “Isn’t it OK to be a billionaire if you played by the rules and worked hard to earn it?”

The wording of the question pre-supposes that the laws and social rules in place, by which a person may accumulate a billion-dollars, are fair and open to anyone. It ignores whether inherited wealth is also deserved.  Most importantly, it treats wealth as if it is only a money count and not a measure of privilege and social power. By doing so, the question as it was posed ignored the essential problem that extreme private wealth is toxic to human society regardless of a person’s character or how they obtained it.

A more salient question would have been, “How many more billionaires can this human society sustain before it collapses?

In the 50,000-year history of human civilization, the concepts of private ownership and private wealth are recent developments. The full ramifications of these constructs on our social cohesion and collective welfare are still being revealed. The written history of civilizations offers no comfort. There are no examples of a happy, stable society where extremes of wealth inequality existed. The lessons of history seem to be that a suitable balance of power is required to sustain a healthy and stable society. Human populations simply cannot tolerate distributions of wealth/power that either force unnatural equality or permit unlimited extremes of private wealth.

There is no question that we crossed the Rubicon into a world where extreme wealth inequality is corrupting world governments and destroying the balance of nature. The questions we should be asking candidates for President and all our elected officials are, “What are your plans to rebalance the distribution of wealth and social power in America?”   And then the follow-up question, “What are you going to do to stabilize and rebalance the Earth’s damaged ecology?”

A State Senator in New Jersey fears a $1 raise for the working poor in this state will be too much of a hardship for businesses if the economy slows down a little. 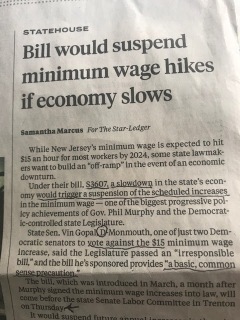 For some national context, New Jersey passed a minimum wage law last year that will boost the minimum to $15 per hour by the year 2024. After the initial jump this past January, the working poor will receive a one dollar per hour raise every January between now and January of 2024.

New Jersey is an expensive state in which to live. The northern half of the state is part of the New York City metropolis. The central sections of the state are within the Philadelphia metropolis. The latest Economic Policy Institute study estimates a family of two adults and two children in Morris County would need a combined income of $104,121 per year to live comfortably. That works out to $50 per hour, 40 hours per week for one breadwinner, or $25 per hour if both parents work full-time. It also means that a single mother making the current minimum wage of $8.85 per hour would have to work 25 hours per day, 9 days per week to live comfortably in Morris County.

State Senator Vin Gopal, a Democrat from Monmouth County, NJ, said the state minimum wage law was an “irresponsible bill” when it passed. He is sponsoring a bill that would suspend minimum wage hikes in the future if there are signs of an economic slowdown. He calls this, “a basic, common-sense precaution.”

Back when workers and business owners were neighbors, owners cared about what would happen to an employee’s family during economic downturns. They would make adjustments and only ask all of their workers to make a small temporary sacrifice if needed so that the business and workers could both survive.

In today’s callus corporate environments, workers are a commodity (labor) to be hired or fired as a way of fine-tuning profits. This jaded view of people is reflected in the pending NJ Senate bill, S3607, which would suspend future minimum wage increases when there are signs of a slowing economy.

This bill doesn’t ask every employee to sacrifice during hard times. It asks only the most vulnerable workers to take a hit for the company. And where is there any built-in expectation that businesses should make any temporary accommodations to their bottom line?

If a company is really so economically fragile that it can’t afford an extra $58 dollars a week for a low wage worker during a downturn, they should have an option to apply to the state for an economic bridge loan to cover the cost of the raise until the economy turns around. Increasing worker incomes during an economic downturn, after all, makes economic sense. It is what economists call an economic stimulus. It increases local spending which helps jumpstart the economy.

For businesses to shift the economic stress caused by the normal ups and downs of the business cycle onto the backs of the lowest-paid workers is repugnant to me.