The abortion debate is mixed up and convoluted to the point that it seems it can’t be sorted out, but let’s try. Let’s step back from the edge and consider how it began. 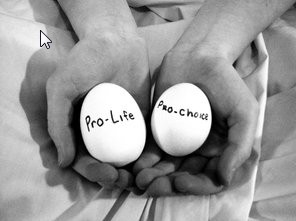 For the anti-abortion movement it has always been a moral issue. For the Supreme Court Roe v. Wade was a constitutional question about the limits of government and the privacy rights of women. The question before the court was essentially this: Does government have a right to impose a Christian moral value on individual citizens?

Ignore that the “Christian moral value” involved is a belief that life is sacred from its inception and the framework of the question itself is one most conservatives would still accept today. Roe v. Wade was about limiting big government. In this narrow sense, the decision didn’t make abortion legal so much as placing it beyond the reach of politicians to govern.

The initial recourse for those who passionately believed that abortion is a sin was to build a consensus for their views across all political and religious lines while condemning the practice in their churches. This was the initial focus of anti-abortion activists. It required acceptance of the ruling while working to alter America’s social norms. This did not remain the focus of the anti-abortion activists for long.

It became apparent that changing social norms is a long, uphill battle. A majority of Americans, including majority of Christians, continued to see Roe v. Wade as a question of personal liberty. The result was a growing moral imperative for Christian activists that became too powerful to wait for social change. Accepting that the abortion decisions could be a “legally protected” private choices was too much to bear, so they took a different next step . They began to run for public office. They decided to take matters into their own hands and directly influence the law.

This was an unprecedented change in American Politics. It was the beginning of the Christian Conservative movement. It required believers to suspend the separation between church and state. The leap to impose a Christian moral law on a recalcitrant society required developing an ideological view of America as a Christian nation. Secular government became the enemy.

This change of strategy was a shock to pro-choice activists and to a majority of citizens alike. It hastened formation of both the pro-choice and pro-life movements and dramatically escalated the polarization of American politics. Establishment Republicans quickly welcomed the Christian Conservative movement and nurtured their development. The Republican party elite somewhat cynically added conservative Christians to their otherwise dwindling political base and adopted family values as wedge issues to win elections. This gave the GOP a new life and a new focus to stay vital. At the same time, the focus of the anti-abortion argument moved from refuting a woman’s right to choose to protecting the rights of the unborn fetus. In effect this extended the inclusiveness and full protections of our constitution from adults to the unborn. This is not a concept considered by our founding fathers who never even attempted to define children’s rights.

Fast forward to today and we see a backlash in the Republican party between social conservatives and the GOP establishment who failed to deliver on all the cynical promise made to Christian conservatives in exchange for their votes. Today there is a large contingent of uncompromising Christian right conservatives in Congress who believe their positions on policies are the will of God. A recent Public Policy Polling survey revealed that 44% of the Republicans now believe we should make Christianity the official religion of the United States.

So we find ourselves hopelessly deadlocked with a large portion of the population believing abortion is murder in both a religious and legal sense and about half the country still believing it is an issue of personal morality to which government has no business enforcing a different ideology. Holding that the U.S. Constitution confers on a fertilized egg the right to be born may be a legal stretch, but others hold that at some point the fetus becomes viable and constitutional protections may then apply. The remainder of the population still sees a live birth as the point where constitutional protections begin. In effect, we are having two separates debates on the subject. What the constitution intended is one debate and what is morally unacceptable for humanity is the other.

The great abortion divide has polarized us like no other issue since slavery. As was true then, the abortion divide has severely damaged our institutions and our ability to self-govern. It has impacted all aspects of our politics and our society. Even our fidelity to the Union and our commitment to majority rule are being tested. How we eventually resolve the abortion issue may be over the horizon right now, but an effort to reconnect with the true nature of our differences would be a good start. It doesn’t help to think of anti-abortion activists as terrorists or of pro-choice activists as murderers. We have to stop talking past each other to achieve a new national consensus on the limits of government and the role of religion in public life. Most certainly that will involve renewed patience and a willingness to accept some degree of compromise on all sides. The alternative to a solution is unthinkable.

By Brian in Uncategorized on October 29, 2015.
← Big Media the Big Loser in Democratic Debate The Great Abortion Divide – Part II →