My wife and I were going through some old boxes when we found a small notebook with receipts and hand written notes from mother. On one page was her Christmas list from 1953. I was just eleven-months old that Christmas in 1953. Patty, my big sister, was four.

I was struck by how quaint Mom’s list seemed. I can see the  care she took to plan this special day for us. The neatness of her figures are a tribute to her business training at Butler High School where she was the first in her family to graduate from the twelfth grade.  Years later she would put these skills to work in her first bookkeeping  job at Robert Halls clothing store in Rockaway, New Jersey, and later at J.C. Penny  in Dover.  But in 1953 she used her skills to plan our family budget.

I can see her sitting at the kitchen table of our rented bungalow on Lake Parsippany. It was a log cabin that had been a summer cottage before being  converted to a year-round home.  It had a fenced in yard and an wonderful enclosed porch that overlooked the lake. The kitchen was just wide enough to accommodate a small chrome legged table with aluminum sides and a Formica top. Mom would sit there in the morning light after Dad left for work, sipping her coffee and enjoying a crossword puzzle or paying the bills. It was her quiet time before my sister and I were awake. It was probably one of these quiet mornings when she penciled this account of our Christmas.  She had gone though each receipt, punching holes in them to file them in her little black, ring bound notebook.

Dad usually left for work most mornings while I was still sleeping. He was an appliance repair man for Sears, which was called Sears and Roebuck back then (I always felt sorry for Mr. Roebuck when they dropped his name. I still think that the change in business model behind this was the beginning of the companies decline).  He worked his full eight-hour day, five days a week and was usually able to be home by dinner.  I have one early memory when I was three or four years old of waking up before Dad left for work and running to the front door to say good-bye to him. But in 1953 I was just an infant.

I don’t know how much Dad was paid for his work. He was very skilled, some said gifted, at this job. I do know whatever he was paid was enough that Mom stayed home with us until I was in school. We weren’t rich, but we had all the things we needed; food, a warm house, clothes, shoes, a doctor who took good care of us and a few nice things to open under the Christmas tree each year.  I know from bits of conversation I heard when I was older that Stretching the budget was always a challenge, but we managed.

Then, after reminiscing about the past,  I asked myself, how much did Christmas cost my parents in 1953?

Including the cookie cutters and cookie sheets, which would become fixtures of our childhood holiday celebrations, Christmas that year cost them just shy of thirty bucks.  But how much is that relative to today’s dollar? It seemed like pocket change based on the numbers.

According to the Bureau of Labor Statistics Inflation Calculator, a dollar in 1953 was worth $8.91 today. That means Christmas cost our parents $288.93, not including food, beverages, gifts between my parents or gifts for friends and relative. And, of course, there was the cost of the Christmas tree. What follows is Mom’s 1953 Christmas accounting in 2015 dollars: 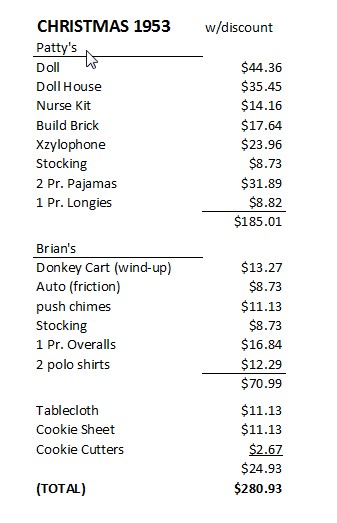 This suddenly seemed like a lot of money.  I looked it up. Half of all Sears appliance technicians today make between $16 and $22 per hour.  The current living wage for a family of four (two children and two adult with only one breadwinner) in Morris County is $24.93/hour. That means over half of all Sears repairmen make less than a living wage.  Living in Morris County as a full-time Sears technician today, means either working a lot of overtime or having a second income just to break even.  Mom was being frugal and wise back in then, but I doubtful our childhood family, with only Dad working, would be able to afford such a Christmas these days.

Now when I look at Mom’s figures they seem less quaint and more savvy.  A family today that is like ours was in 1953 would never be able to save up for a house, own a new car, go on a family vacation or get by without occasional assistance from family, friends or the government.

We constantly ask families to do more even though they already do. In most families like ours both parents work. The hours most of us work per week are more numerous. Many parents have more than one job, and children get to be with their parents less and less.  Is it no wonder people say that families are falling apart these days?

Money can’t buy love, but a living wage can make us feel good about ourselves once again as we can take proper care of our families.  And returning to a 40 hour work week would allows us to spend more precious time with our children who really do need us to be there for them. These simple conditions are what made America strong in the past. They would certainly strengthen our families once again today.

By Brian in Uncategorized on November 21, 2015.
← The Great Abortion Divide – Part II Cults and the Conservative Base →