Home » Elections » Why Bernie Sanders Must Fight for a Contested Convention

Why Bernie Sanders Must Fight for a Contested Convention

An Open Letter to Rachel Maddow in Response to Her May 2nd Segment on Why Bernie Should Bow Out of the Race. 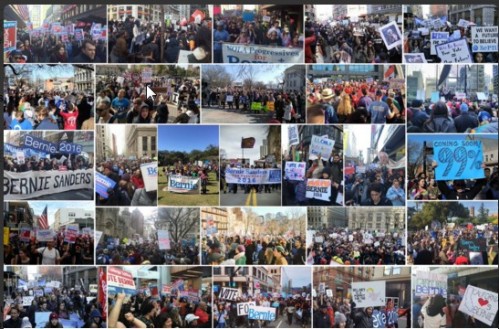 I’m a fan of yours, but I join those writing in opposition to your arguments against Bernie’s ideas of a contested Democratic Convention. The rules are set up to allow for this type of contested convention. Whether or not a trailing candidate for the Democratic nomination chooses to bring their fight to the floor has always been predicated on exigent circumstances of the times, not just institutional courteous or party loyalty.

In prior presidential party contests opposing, or insurgent candidates have fought for the support of their party with the goal of everyone unifying behind the candidate generating the most excitement with the best chance of winning against the other party candidate. In my 60 years these have always been intra-party contests, but these are different times. Party reformation has never played as large a roll as it does now.

This years election is a referendum on establishment politics itself. The pundits in both parties still fail to grasp this obvious fact.

The Republican Party is starting to wake up. Their primary season has been an expensive disaster. Their tuberous outcropping of so many weak presidential candidates, all casting about for a winning message, was an obvious sign that the GOP itself is in critical condition. The establishment elites of that party have abused their privileged status for years. They have made too many cynical promises to voters, promises they never intended to keep, They applied deceptive marketing to arouse their base and garner favor with an electorate that they secretly despise. Once in office, they cynically sold themselves to big business and big money interests while tossing crumbs to the people who elected them.

The Democratic Party suffers from the same disease as the Republican Party, but at an earlier stage. Party elites are caught in the death grip of powerful private interests. The will of their constituents have become secondary. Dwindling turnout over the past decade has been ignored as long as slick marketing techniques were still winning election.

But elections are not all about winning, they are ultimately about governing.

Money in the Democratic Party isn’t just a necessary evil anymore. It is now a growing tumor. The people who really hear what Bernie Sanders is saying recognize that he is proposing a cure that might prevent this cancer from metastasizing. Meanwhile the establishment media still thinks this election is only about a fight for progressive ideas.

Given the state of the two parties, a Sanders win would be a foregone conclusion. All the polls say as much, yet this is message isn’t seeping into the consciousness of the establishment.  The Democratic Party is eager to put Hillary’s negatives up against Trump’s negatives any day, in yet another hold-your-nose-and-vote election.

And, they would be right if this election was only based on ideology. But it isn’t. It is a referendum on our political establishment. Not only will Hillary Clinton have  disadvantages related to her high unfavorability, she will not win the support of youthful “movement” Democrats or disgruntled independents.

If the race is between Clinton and Trump it will be a race between an establishment and a non-establishment candidate. Given the anger and level of dissatisfaction around the country, all bets should be off as to how that contest might turn out.

By Brian in Elections, Politics, Uncategorized on May 3, 2016.
← A Silent Rage Approaching Mine Hill, New Jersey – Headwaters of the Lamington River →