[Check back for daily updates below]

Much of the national and local coverage of this coronavirus outbreak in the United States fails to set the proper global context as to how we are doing at handling it relative to every other country on earth. This lack of perspective gives us a false sense of success at how well we are doing in reducing new infections and COVID-19 deaths. This false sense of being over the hump fuels the polarized political debates that further divide us on every issue. We should be united behind the science of infection controls during a global pandemic rather than driving wedges into the public debate to support or defend our political instincts. The virus certainly doesn’t play politics, and neither should we.

So, for a better perspective on how the United States is doing in our efforts to control this epidemic against the backdrop of the rest of the world, here are a few observation based on the number of new infections and deaths from yesterday, April 29th:

1. The United States had nearly as many new cases of COVID-19 yesterday than the next seven countries combined. The USA has 35% of the world’s new cases but only 4.2% of the global population. 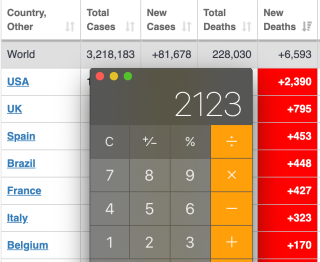 2. The united states had more COVID-19 deaths yesterday than the next six countries combined. We had 36% of all COVID-19 deaths in the world in the prior 24 hour period.

These comparisons clearly show that COVID-19 infection rates and deaths make the United States a huge outlier in the world.  We are not doing nearly as well as most other countries. And keep in mind that every nation still only has social distancing as the primary means to control the spread of infections. Testing, isolation, and contact tracing are part of the mix, but keeping infected people away from healthy people is all we’ve got at this point until we have a vaccine or effective treatments available. We are all in the same boat.

These data, by the way, are continuously updated from the Worldometer.info website, a non-government, non-affiliated international effort to provide global statistics in an easy to access formate.

So, the question has been asked, why are we doing so poorly compared with other countries?

The answer is clear and inconvenient for many Americans. We have a lack of political leadership from the top.

The wealthiest, most inventive, and industrious country in the history of the planet should, by now, have the capacity of testing 10 million citizens per day for the virus. Millions of people who are now unemployed should be hired, by now, to conduct testing, contract tracing, and welfare checks the millions who test positive for the disease and placed under quarantined. We should have in place a national stay at home order the same as every other country. We should have exceptions for stay at home order for essential workers, but we should have massive testing and mandatory guidelines, with aggressive enforcement, for those workers. We should not only have all the PPE we need by now, but we should also be exporting vast quantities of PPE to other nations that don’t have our manufacturing capacity.

This is a picture of the nation we should be, the great country we once were. Nations of the world should be looking to us for guidance and help. Instead, we are inching our way back towards another round of disaster and death.

The USA’s new infections are up and the death total is down today. Total COVID-19 tests are at 6,416,393 total tests or 19,311 per million population. We are ranked 44th in the number of tests/million. 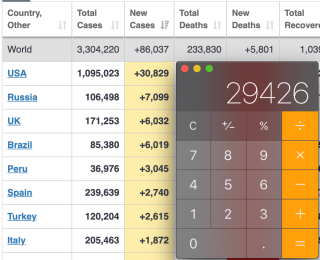 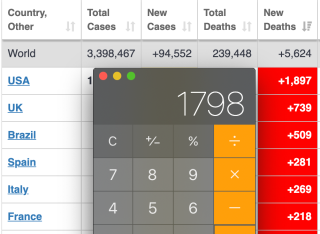 The USA’s new infections are down from yesterday to 29,744 new cases in a day, more new cases than the next 6 countries combined. The death total (a lagging indicator) is also down from yesterday to 1,691 today. The total COVID-19 tests administered yesterday were 328,511 for a cumulative total of 6,931,132 total tests or 20,940 per million population. We are still ranked 42nd worldwide in the number of tests/million.

The USA’s new infections are down 2 days in a row from to 27,348 new cases, more new cases than the next 5 countries combined. The death total is also down from the past 2 days to 1,154 today. The total COVID-19 tests administered yesterday were 265,608 for a cumulative total of7,196,740 total tests or 21,742 per million population. We are ranked 41st worldwide in the number of tests/million.

When I started tracking how well we are doing fighting the virus compared to other countries a few days back I made the error of not looking back on the data far enough to see the existing pattern. I will correct that here with two bar charts. The first shows the shape of the curve for new cases of COVID-19 in the US and the second shows the death rates over time. Both reveal the spikes and dips in numbers as outbreaks flair and social distancing takes its effect on transmission rates. The overall message is one of encouragement as COVID-19 deaths are trending down and to a lesser extent, so are infection rates. The cautionary message is that some of the flair-up have spiked to record levels of transmission and death. This suggests that we should maintain our social distancing behaviors while being more proactively to take steps to prevent COVID-19 hotspots from flaring up in places where hotspots are likely to occur.

And because this is a global comparison, here is a side by side comparison of the graphs supplied by Worldometer on global and US deaths.  While the global graph is weekly and the US graph is daily, the overall time period is similar, so the graphs were sized alike to try and get a fair comparison of the shape of the curves, and they appear to be similar in slop. 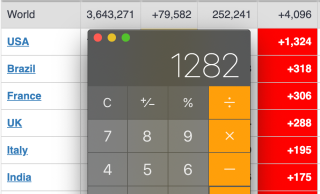 The USA’s new infections are up slightly to 24,798 new cases, nearly as many new cases as the next 5 countries combined. The death total rose again from 1,324 new deaths to 2,350 in the last 24 hour period. The total COVID-19 tests administered yesterday were 265,507, down 184 fewer tests from yesterday, for a cumulative total of 7,727,938 total tests or 23,347 per million population. We are ranked 41st worldwide in the number of tests/million.

By Brian in Uncategorized on May 6, 2020.
← USA COVID-19 Response TODAY Against the Backdrop of the WORLD An Alternative to Total Lockdown is Urgently Needed →