Here is the Internal Revenue Service controversy in a nut shell. Rank and file IRS agents used search terms such as “tea party” to triage a mountain of applications for tax exempt status. What the agents were trying to identify were applications where the purposes of the organizations were primarily political. Under IRS regulations, organizations applying for 501(c)(4) tax exempt status must primarily be involved in social welfare activity. All the triaged applications were eventually approved. Virtually everyone agrees the IRS must be politically neutral, so the methods the agents used to organize their workload is not an acceptable practice.

This principle and these core facts are not in dispute by anyone familiar with the details. The partisan contentions understandably arise from the lengthy inaction by senior IRS officials to end this practice. Were senior managers incredibly blind to what agents were doing or did they turn a blind eye?  If it was the latter, did they ignore the practice for practical reasons or political reasons?  Who up the political chain of command knew of the practice and when did they learn about it?

As happens often in today’s politically charged atmosphere, the partisan conflagration set off by the revelations is sucking all the oxygen out of the room leaving no one to explore why these practices developed in the first place.  The “scandal” is a media induced distraction from much more serious problems under the surface.  Among the questions we should be asking are these:

Is there an increase in tax exempt applications and is the increase asymmetrical?

Probably so, although the assessment of this is indirect.  According to an analysis of data released by the IRS in response to the criticism, Martin A. Sullivan of TaxAnalysitst.org found that among the tax exempt applications approved by the IRS about two-thirds were submitted by conservative organizations.  The remainder were either liberal leaning organizations or politically neutral.  According to Professor Rob Reich in the April/May Boston Review, there has also been an unprecedented growth in the number of charitable foundation, or 501(c)(3) organizations. He attributes this to the growing wealth of the richest Americans. They are establishing foundations to leave a legacy and project their political influence on society from beyond the grave.  So far, according to the IRS and other sources, there does appear to be a sharp increase in 501(c)(3) and (4) applications for tax exempt status. It also appears that this increase in applications are skewed towards conservative organizations and wealthy donors.

Is there a problem with tax exempt 501(c)(3) and (4) organizations being too overtly political, and if so, is the problem asymmetrical? 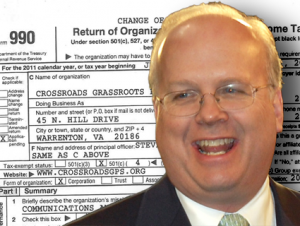 Image of Karl Rove by chicagopublicmedia/Flickr

According to some sources, since the Supreme Court’s Citizens United case there has been a  growing number of wealthy people and corporations creating charitable foundations and social welfare organizations through which predominantly political messages are being delivered to the public, tax free.  Just as we have increasingly been subsidizing big business through corporate welfare, we may now be subsidizing political messaging campaigns directed at us.

According to it’s mission, “The David Horowitz Freedom Center combats the efforts of the radical left and its Islamist allies to destroy American values and disarm this country as it attempts to defend itself in a time of terror.”

Painting the American left as affiliates of Islamist terrorists (or other notorious dictatorships as seen in on other sites) is a common theme on some conservative websites.  This information is what passes as a public educational service justifying tax exempt status.  Additionally, the site contains ads, which may or may not be paid advertizing.  The site does claim to be 501(c)(3) tax exempt and solicits the viewers tax exempt donations.

The next organization on the search list is the Western Center for Journalism.  It bills itself as a 501(c)3 tax exempt foundation and accepts tax exempt donations, yet it describes itself as a conservative organization and promotes a book written by the organizations current president, Floyd Brown.  Brown’s latest book, “Obama Enemies List: How Barack Obama Intimidated America and Stole the Election”, was released  in January 2013. Virtually all of the contents on this site are partisan in topic and perspective.  One article by Steve Baldwin, for instance, starts out this way:

” Very few Americans realize there exists a large network of far left philanthropists and foundations in America dedicated to destroying the American way of life, our Christian-based culture and our free enterprise system. They seek to remove America from its constitutional foundations and move it toward a European-style socialism. Much of this effort is coordinated by a little known group called the Tides Foundation and its related group, the Tides Center.”

So I looked into the Tides Center and found it to be a 501(c)(3) organization dedicated to fund projects related to:

Donations to the Tides Center are tax exempt, but other than its support for some issues unpopular with conservatives you will find nothing overtly political on the web site.

The third organization on the Google search list is the RightWingWatch.org operated by People for the American Way.  This is a liberal organization.  RightWingWatch was on the search list in connection with an article refuting a claim by Rick Joyner that Timothy McVeigh (Oklahoma City Bomber) was actually a left wing radical, not a right wing terrorist.  Rick Joyner is the founder and executive director of MorningStar Ministries and Heritage International Ministries. He is also the Senior Pastor at the MorningStar Fellowship Church, a tax exempt organization.

People for the American Way bills itself as a 501(c)(4) organization, but they don’t use our tax money. When you donate you get this disclaimer:

“Because we lobby Congress, donations to People For the American Way, a nonprofit 501(c)(4) organization, are not tax deductible.”

In contrast, Freedom Works Foundation is a conservative non-profit organization. It is currently headed by former U.S. House Majority Leader Dick Armey, a Republican. The site say it is inspired by the leadership of Barry Goldwater and Ronald Reagan.  It’s content is distinctly and exclusively conservative. If you press the icon to donate to the foundation web site you are taken to the donation page for Freedom Works (without the word “foundation”) which is a political action organization. There you will be given a choice to donate, “… where my donation will be used directly in the fight in Washington,” or “… where my donation will be 100% tax deductable and will be used for education, research and other efforts.” So the Freedom Works Foundation, which is tax exempt, shares the donation page of Freedom Works, which isn’t tax exempt.

Now, for symmetry sake, Google “right wing organizations.” The first three organizations (excluding the C.S. Monitor) on the search list are People for the American Way (or RightWingWatch), which does not count donations as tax deductions, the PublicEye.org operated by a tax exempt group named Political Research Associates, and Common Dreams, also tax exempt.  The Common Dreams link is to a three paragraph article on the resignation of the IRS commissioner.  It isn’t particularly political.  The People for the American Way provides an extensive list of right leaning organizations with detailed information on each.  Unlike the David Horowitz Freedom Center, this list appears to contain only US organizations.  There is no attempt to link these groups to foreign or domestic terrorist organizations. The site describes their effort this way:

“Right Wing organizations come in all shapes and sizes, from think tanks to legal groups, local and national lobbying organizations, foundations and media forums. At any given moment, the Right is at work in our public school systems, courthouses, in Congress and state assemblies. At the same time, right-wing groups are reaching huge audiences through media outlets they own or influence — promoting regressive policies that seek to drive wedges between and among Americans.”

So regressive policies and promoting division among citizens is the worst this group has to say about right wing organizations.

This isn’t an exhaustive survey, of course.  It’s just an exercise. But on the face of things it does appear that some tax exempt organizations have a very political agenda.  It also seems that conservative leaning non-profits are more overtly political and include more information of questionable educational value. The problem of political activity among tax exempt groups seems asymmetrical.  The added value to the public worthy of extending tax credits to these, or to any overtly political organization is dubious.

Does the IRS have the personnel and resources to properly handle their workload?

According to the IRS, the answer is no. IRS funding was held flat for three years between FY 2005 and 2007. There was a 2.5% cut in its 2012 budget and now it is being squeezed by budget cuts and the sequestration, prompting protests by IRS personnel. There is also this summary of the IRS situation prior to the last two years of budget cuts:

The most serious problem facing U.S. taxpayers is the combination of the IRS’ expanding workload and the limited resources available to the IRS to handle it. Among the consequences:

•       the IRS is unable to adequately meet the service needs of the taxpaying public. [it’s only funded at an 80% level for this service.]

•       the IRS is unable to adequately detect and address noncompliance, requiring honest taxpayers to shoulder a disproportionately large share of the tax burden.

•       the IRS is unable to maximize revenue collection, contributing to the federal budget deficit.

So the answer to this question seems to be no. This gives credence to claims that IRS line staff were triaging tax exempt applications to better handle their workloads. It also suggests that the problem of the huge collection gap, between what is owed and what is paid, won’t be fixed anytime soon. It has been estimated by the IRS’s own computer analysis that there are about a million tax returns each year that appear to contain fraudulent information but are not audited.  At a time when the federal government is starving for revenue the anti-tax sentiments in congress seem to extent to collection of legally due taxes, not just tax increases.

Finally, is IRS agents to determine the degree of political activity permitted by current IRS regulations an impossible job?

The answer to this last question is yes, it is absolutely impossible. In the increasingly polarized politics of today there are often disagrements on who is a liberal or a conservative. The two camps can’t even on a common set of facts for any given topic.  How can the IRS possibly create a suitable metric for deciding which 501(c)(4) organizations have crossed the political line. Even more importantly, why is the IRS even trying to make room for political activity for tax exempt organizations? The clear intent of the law excludes the  from any political activity at all.  This is what tax payers should demand in exchange for the tax break these organization receive from us.

Here then is the real scandal. The IRS, one of the most fundamental agencies in government, is under staff and without resources by congressional design at a time when it faces massive fraud and abuse, growing anti-tax sentiments and a groundswell of people and organizations trying to claim tax exemptions for overtly political purposes. It is trying to police this latter situation with an unenforceable and illegal regulation that it has been saddled with for over 60 years. Why isn’t this the real IRS scandal?