The Economy Didn’t Stall for Congress During Recession

I know a place you can work where, on average, employees can accumulates personal wealth at a rate of over 15% per year!  The catch?  You have to get elected to Congress.
This is just one bit of information parsed from data on the average wealth of members of Congress.  The database is available at OpenSecrets.Org [http://bit.ly/vRBruV], courtesy of The Center for Responsive Politics.  It comes with some serious caveats. According to OpenSecrets:
“By law, members of Congress are only required to report their wealth and liabilities in broad ranges. It’s therefore impossible to precisely determine how much value their assets are worth, or have gained or lost. from year to year. The Center for Responsive Politics determines the minimum and maximum possible asset values for each member of Congress to calculate a member’s average estimated wealth.”
Congress has set rules for itself so that we can only guess at how much each member is worth.  Their net worth can only be expressed as an average within a broad margin of error.  But it is still possible to learn some things about Congress as a whole if you aggregate the numbers and analyze how they change over time.
The analysis which follows is based on average Congressional wealth data for two points in time, in 2004 and in 2010.  It appear that the data only includes members who were in the House or Senate during this six year period.  Keep in mind that during this period of time the United States economy nearly collapsed.
Keep in mind that of the 383 members of the House or Senate included in this analysis, the fortunes of 140  member declined while in office.  The figures below on combined wealth adds up all the gains and subtract all the losses to arrive at the average wealth increases.  Also, to make the graphics more comprehendible and directly comparable, the dollar amounts are divided by the number of representative in each category and expressed as averages per legislator.
The other point to remember is that there are five members in the legislature, three in the House and two in the Senate, who are very wealthy.  There combined wealth is estimated at over $1.5 trillions dollars.  This skews the averages and makes the average member of Congress appear to be more wealthy than the are.  Nevertheless, this analysis is primarily about how Congressional wealth grows over time.
So did the personal wealth of our legislators grow over the six year period between 2004 and 2010?
Yes.  The combined person wealth of our legislators rose from around $2.2 billion in 2004 to $3.1 billion in 2010.  That is a 40.4 % growth in net worth, or around a 6.7% annual growth rate.*
Was there a difference in the growth rate between the political parties?
Yes. Republican’s as a group faired better than Democrats.  Republican’s had a 12.9% annual growth rate in personal wealth while Democrats gained at a 2.7% rate.  The combined gains of the three independents in the Senate was high also, but as you can see their combined income per member was much smaller that that of their colleagues. 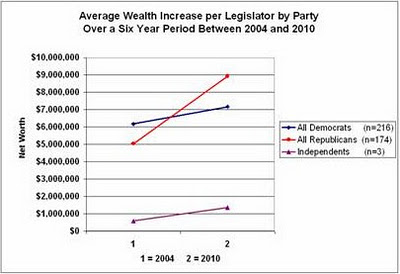 Was there a difference between the House and the Senate in the growth rate of personal income?
Yes again.  The Senate is a much wealthier body than the House and it actually lost a little net worth over this six year period.  The House gained 75.1% in personal wealth for a 12.5% annual rate of growth. 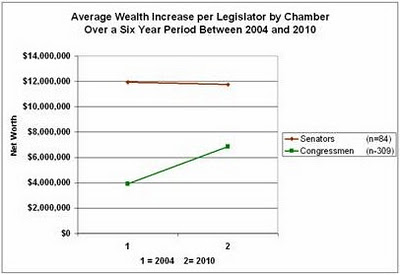 When the data is further broken down by both political party and Congressional chamber it appears that Senate Democrats are collectively the wealthiest group, and the only group that lost a little personal wealth over six years.  The House is the wealthiest chamber for Republican’s, and it is also the chamber with the highest rate of growth in personal wealth.  House Republican’s as a group gained 92.8% in net worth while House Democrats gained 51% over six years. 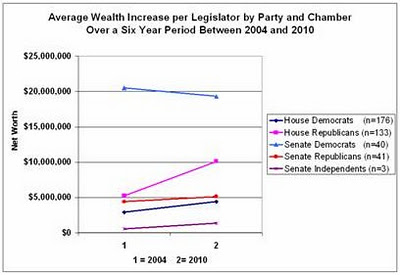 Did everyone in Congress fair well over this six year period?
No. As mentioned earlier, 140 legislators lost wealth during this time.  The graph below breaks down the numbers of those who gained and lost personal wealth while in Congress.  House Democrats had the highest percentage of gainers at 67% while Senate Democrats has the lowest ratio of gainers at 59%.  The percent of those gaining personal wealth among House and Senate Republican’s was 62% and 65% respectively.  Overall, almost two-thirds (64%) of Congress gained personal wealth during their time in office. 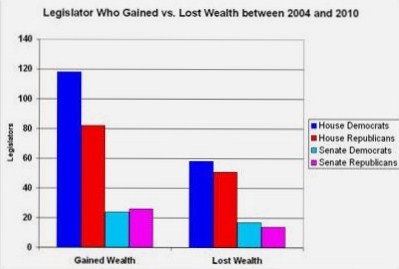 What about those who gained the most?  Just how well did they do?
There are at least two different ways to identify who gained the most.  You can look at in terms of dollar amounts gained or as a percentage of growth in net worth.  In come cases percentages can be misleading.  A person with $10.00 who gains a buck has a 10% rate of growth, but you wouldn’t say they got rich.  So both measures were used here and the results are in the following two graphs below. 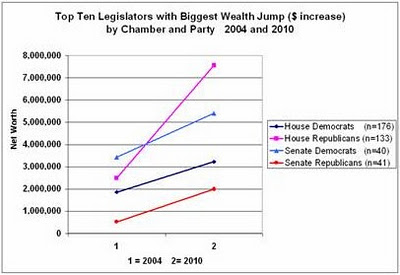 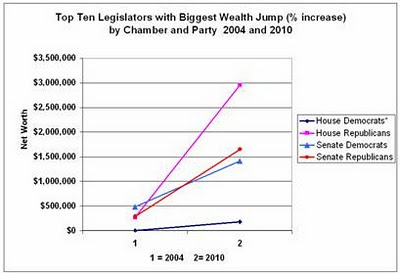 Looking at both the percentage increase and actual dollars increase methods, the top ten House Republican’s, with the highest gains in personal wealth, clearly out paced the rest of their top ten Congressional colleagues in accruing wealth.  As a percentage increase in personal wealth the top ten Republican Senators and top ten Democratic Senators did equally well. The wealth of House Democrats appears to barely rise on the graph above, but that’s because they start out with so little compared to their colleagues.  The actual percentage increase for the top ten Democrats in the House was over 4000%.
So what does all of this mean?
Our legislative representatives are rich.  I’m not an economist, or a researcher, but a few conclusions do seem apparent from this analysis.  Congress, as a group, is quite wealthy.  While it may be true that there are over 400 billionaires in the United States and none in Congress, it is remarkable that nearly half of those in Congress (49%) were millionaires in 2010.   About 10% in Congress were multi-millionaires and five members were among the 1% of wealthiest Americans[1].  The wealthiest group in Congress are Democratic Senators.  They start out that way and stay that way, although they gain the least by being there.
While nearly a third of Congress are less well off after six years in service, the majority were better off and many were far better off in 2010 than in 2004.  The actual growth in personal wealth seems to be more apparent among Republican’s, particularly House Republicans, but the percentage of growth in personal wealth among the top ten House Democrats extraordinarily high.  Only 28 legislators have a net worth under $100,000.00 and only 15 are in debt.  I will leave it to the reader to contrast this with the your own situations and the folks you know.   What this analysis can’t do is tell us why  the data is as it appears. I will leave that to others for now.
All of the tables for this analysis appear below.  I encourage readers of this blog to review them for accuracy and use them to develop more information regarding the wealth patterns or our federal representatives .  Please leave comments if you find any errors or omissions in the tables.  I will make appropriate corrections on this blog post.
[1] In defining “the 1%” I prefer an approach based on wealth, not income.  Wealth is power.  Income is only an indirect measure of wealth and power.  (Is the strength of a batter measured by the rate at which it is charged or by the energy has stored?).  For my purposes here I am defining the 1% wealthiest legislators in Congress beginning with the assumption that one percent of American’s own 35% of the wealth in the US.  The net worth of all American households in 2009 was $54 trillion dollars.  There were 121,611,029 households in America in 2009 according to the US Census Bureau.  That means 1% of all households equals 1,216,610 Americans. So 1 % of all households own 35% of $54 trillion, or $18.9 trillion dollars.  If my math is correct that means that the average wealth of a household among the top 1% equals $149,277,318.
*correction: on an earlier version I mistakenly said trillions instead of billions in referring to the collective wealth of congress.

By Brian in Distributive Justice, Government on November 17, 2013.
← Immigration Myths Hide the Benefits Says US Chamber of Commerce Obamacare – Is It For Good or Evil? →