A recently published analysis by Thomas L. Hungerford (see highlights below) looks at factors driving the growth of income inequality for the period between 1991 to 2006.  Hungerford looked at the contributing impact of three factors, tax policy, labor wages and capital income. During the studied period he found that capital income (capital gains, interest income, business income and dividends) was by far the largest factor contributing to rising income inequality. Wages and salaries alone were not a factor and tax policies were only a minor contributor during this period, largely due to the more favorable tax treatment of capital gains.

This report doesn’t trace the history of income inequality prior to 1991 where changes in wage growth in the late 1970’s and the collapsing of upper income tax brackets in 1980 and 1985 were more dramatic.

It is worth remembering that for most of the past 100 years capital gains was treated as ordinary income for tax purposes.  In recent times, capital gains have be treated as a separate class of income with a more favorable tax treatment. Capital ownership has always been more concentrated at the upper end of the income/wealth continuum.  Capital is, of course, an ownership stake in our economy whether through stocks, bonds, property or business ownership. The income generated when these capital investments are bought and sold is currently taxed at 15% (if it is held for more than a year). That is less than half the top tax rate for wages and salaries.  And how is capital ownership distributed in America?

Who Owns What In America?

The distribution of wealth ownership, as opposed to income inequality, is even more skewed towards the wealthy as the pie chart below shows.  The whole pie represents the total wealth in America.  Each of the five slices of the pie represent 20% of the US population according to how much wealth they own. 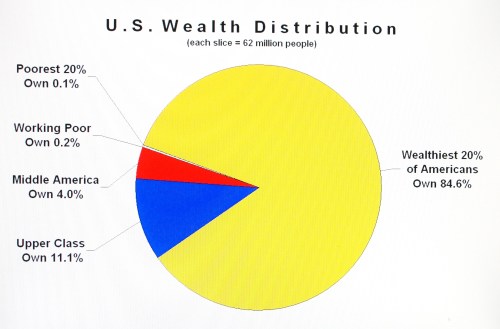 The slice of ownership for the poor and working poor are barely visible. Eighty-percent of all Americans own just 15.6% of America’s wealth. The number of people who slipped into poverty in 2010 was at an all time high of 46.2 million, so the poorest 20% of all Americans, in terms of wealth ownership, includes 15.5 million who are technically above the income poverty line. The poorest 40% of Americans essentially own almost nothing while the top 20% own almost 85% of everything.  As a result, favorable tax policies for capital gains income has a highly disproportional benefit for the wealthiest Americans. Capital income for this wealthy segment is what drives rising income inequality today.

Changes in Income Inequality Among U.S. Tax Filers Between 1991 and 2006: The Role of Wages, Capital Income, and Taxes

HIGHLIGHTS FROM THIS REPORT:

Research has shown, however, that income mobility [in the United States] is not very great and the degree of income mobility has either remained unchanged or decreased since the 1970’s (Hungerford 2011, and Bradbury 2011).

Three potential causes of the increase in after-tax income inequality between 1991 and 2006 are examined in the analysis: changes in labor income (wages and salaries), changes in capital income (interest income, capital gains, dividends, and business income), and changes in taxes.

Increased salaries paid to CEOs, managers, financial professionals, and athletes, is estimated to account for 70 percent of the increase in the share of income going to the richest Americans (Bakija, Cole, and Heim 2010).

Income of the richest 0.1 percent of taxpayers is sensitive to changes in asset prices and this may have been especially important in the increase in the income share of those at the top of the income distribution (Bakija, Cole, and Heim 2010).

While the individual income tax system is progressive and has been since it was introduced in 1913, the trend has been toward lower marginal tax rates and a less progressive tax system (Piketty and Saez 2007, and Alm, Lee, and Wallace 2005). As a result, the tax system may be less able to equalize after-tax incomes.

The major tax changes between 1991 and 2006 were (1) the enactment of the Omnibus Budget and Reconciliation Act of 1993 (OBRA93), which increased the top marginal tax rate from 31 percent to 39.6 percent, and (2) the enactment of the 2001 and 2003 Bush tax cuts, which reduced taxes especially for higher-income tax filers. The Bush tax cuts involved reduced tax rates, the introduction of the 10 percent tax bracket (which reduced taxes for all taxpayers), [it also] reduced the tax rates on long-term capital gains and qualified dividends. In 1991, long-term capital gains were taxed at 28 percent (15 percent for lower-income taxpayers) and all dividends were taxed as ordinary income. The next year, the

Hungerford (2010) notes, however, that about 75 percent of families contain just one tax unit (another 17 percent contain two tax units with the second tax unit usually a cohabitating adult or a working child that cannot be claimed asa dependent on another tax return). Consequently, most of the tax units likely represent a family.

capitals gains have increasingly become an important source of compensation for corporate executives (through stock options), and private equity and hedge fund managers (carried interests). Consequently, income from capital gains is included in the analysis.

Tax policy may have also have had an indirect effect on rising income inequality, especially between 2001 and 2006. The reduction in the tax rate on long-term capital gains and qualified dividends may have led to the increased importance of this source in after-tax income.

Overall, changes in [wage] labor income does not appear to be a significant source of increased income inequality between 1991 and 2006. Wages had no or a small disequalizing effect when other inequality measures are used.

Thomas L. Hungerford currently works at the Congressional Research Service (CRS) which is part of the Library of Congress. The CRS  provides the policy and legal analysis to Congressional committees and Members, regardless of their party affiliation. CRS staffers sometimes do reports on their own. Hungerford says this report, “… [does] not reflect the views of the Congressional Research Service or the Library of Congress.”  Hungerford is well-published in the professional literature.  He has worked for the Social Security Administration, the Office of Management and Budget, and the General Accounting Office in the past.  The excerpts highlighted here are of my own.  You are encouraged to read the full study at the URL address provide above.

By Brian in Business, Economy on February 27, 2013.
← Raising Wages Would Revive Our Economy Ideological Barriers to High School Graduation For Every Child →