Beware America! The push is on for yet another round of self-serving corporate tax reform.  A press release from the Business Roundtable announced the release of a new report touting the economic benefits of “revenue neutral” corporate and individual tax reforms.  Below is a summary of the findings from the press release and a link to the report.  But before you read it, consider what the real trend is in corporate tax revenues compared with what individuals contribute.

HERE IS THE TRUTH! Corporate tax rates do not reflect what  corporations actually pay in income taxes, and the effective corporate tax rates, as well as the percentage of tax revenues they contribute have been in decline for decades. 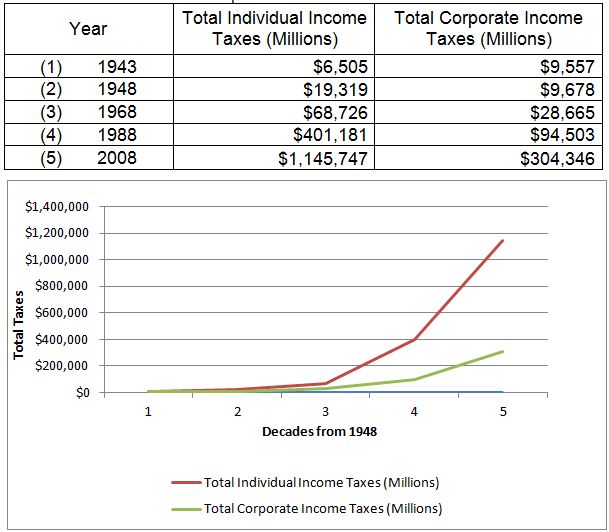 The table above (in millions of dollars) is based on statistics from the Office of Management and the Budget in the White House [www.whitehouse.gov/omb/budget/Historicals/].

Shifting the tax burden from corporations to individuals over the past 40 years is yet another factor contributing to the current decline in domestic consumer spending.  Wage suppression, the shifting of the tax burden from the rich to the middle class, coupled with the decline in the tax burden on corporations are all that is needed to explain the decline of America’s middle class, the rise in poverty and the growth of government spending in social support programs.  The people are going broke, the government is going broke trying to prop us up and the rich are becoming richer and more powerful each year.

Key components of the Roundtable’s analysis include: [also known as “talking points”]

By Brian in Business, Taxes on April 22, 2013.
← CLASS WARFARE – OVERVIEW OF WAGES, TAXES and WEALTH IN AMERICA Ruppert Murdoch, Ayn Rand and A Sociopathic Economy →